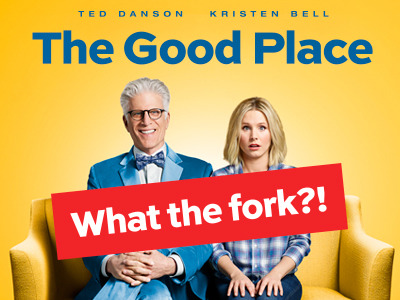 The Good Place in the middle of Season 3. As far as 2010s Big 4 network comedy goes, this one is in my top 5 (the other four being the Will & Grace reboot, Sean Saves the World (RIP), The Carmichael Show (RIP) and the early days of Modern Family). It’s cheesy. It’s ridiculous. It’s great.

The first season of The Good Place followed Eleanor Schellstrop, who becomes a member of the The Good Place, the equivalent to Heaven. This place, created by Michael, is plotted into tiny neighborhoods with absolute perfection. You have soulmates, the house of your dreams, sunny weather, flying lessons, and the afterlife’s equivalent to Siri (Janet), and a whole lot of frozen yogurt. Things are paradise except for the fact Eleanor isn’t a lawyer who loves clowns and went on hunger strikes and fed kids in less developed countries. In fact, she is a narcissistic con artist from Arizona. Believing she is experiencing a case of false identity, she asks Chidi, an ethics professor, to teach her how to be good. Along the way, she meets Jason, a classic Florida man who isn’t all up there in the intelligence department, and Tahani, a beautiful woman who loves to name drop her famous friends/lovers/relatives/you name it. Through some context clues and a gut feelings, Eleanor figures out Michael and his neighborhood aren’t from The Good Place, but actually one long con artist scheme from The Bad Place (aka Hell).

Season 2 is what fans like to call the “Sims season”. The first few episodes focus on Michael and Janet resetting the neighborhood multiple times to see if they can create the perfect torture chamber, while hiding the failed missions from devil himself. The season then shifts to the cash going through literal hell in order to speak to the Judge about Michael’s hypothesis that people in the afterlife who were previously bad can become good, shattering the current system. The Judge (played by Maya Rudolph) puts each person through a pass/fail test, but concludes the only way to test them is to reset their life on Earth.

Season 3 is the reset humanity season. Michael and Janet monitor the group’s human lives post-near-death experience to see if they are genuinely good people. Unfortunately, things do not turn out the way they wanted to so the duo takes things into their own hands. The Judge finds out, The Bad Place finds out, and it becomes chaotic to the point the group finds out about The Good Place. Yes, we were totally not expecting that. The group of six now have to deal with life on Earth trying to be good and the people around them good. Shall I mention there was an appearance by one of the Hemsworth brothers?

The show is predictable, but still holds its humor at a comforting level. It’s easy to binge and Kristen Bell is relate-able as she walks the line of being a bitch and being a decent person.