Curtis Ramstedt, local ATX artist and founder of Esplosivoism, is at it again! For those of you who don’t know Ramstedt or Esplosivoism, you are in for a treat as the two go hand in hand. Esplosivoism, in my mind, is taking a pound of Salvador Dali with a couple gallons of modern psychedelic strokes, a pinch of political statements and a whole lot of bold style. For a concrete definition from the founder himself, please read:

“Esplosivoism I describe as [the] pragmatic marraige between the modern and the classical. I use modern techniques such as emphasis on shape and bright color. I do have the same birthday as Henri Matisse [December 31st], but I also use philosophy, symbolism and Renaissance-esque themes like classical art.”

Ramstedt is taking the ATX by storm, even been recently featured in Gorrie’s Perspective.

(For my ol’ Your Way With Words followers, you may know this man by a different name with a different art skill: Curtis Des Marias, the poet. Remember “I, Sisyphus”? How about that villanelle, “Pour Ma Jolie”?)

The quirky man with a crazy sense of fashion and art has revealed his latest painting, “Catholica Scientiam”, one of the biggest projects he has undertaken. I at first thought it was multiple canvases that he cut up and glued together but boy was I wayyyyyyyy off. It’s a build-able canvas that makes a statement between Catholicism and science.

I feel like I’m in 1970s galactic disco with a bunch of floating grapes (this is why I’m the writer/math in the group and not the art curator hahaha).

I feel like I’m on the border of three different dimensional wormhole portals. The contrast between the left and the right is quite significant. I wonder if he meant to put the creative side on the left and the logical, black/white side on the right to match the personalities of left-handed and right-handed people. I asked him and he had this to say:

“[It’s a] relation between culture and economic systems and human rights and scientific progress.”

Yep, I’m off. But that’s the joy of art. You can interpret it any way you like. 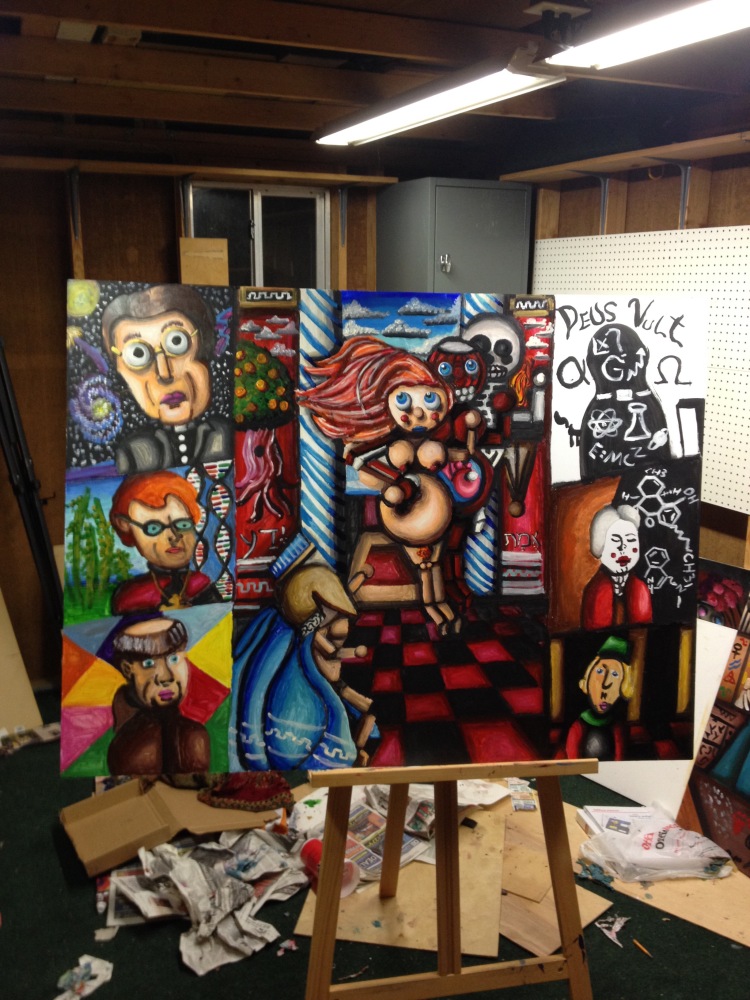 The inside (Courtesy of Curtis Ramstedt)

When you open it, the relation is made much more clear. Though I still feel like I’m in a fancy palace with naked pregnant lady that is being observed by a bunch of scientists.

Curtis Ramstedt is an interesting guy. He’s come a long way from his start in 2013. He is inspired by things in his life and, according to Ramstedt, the random “thoughts [he has] at the day…[his] brain never shuts off.” 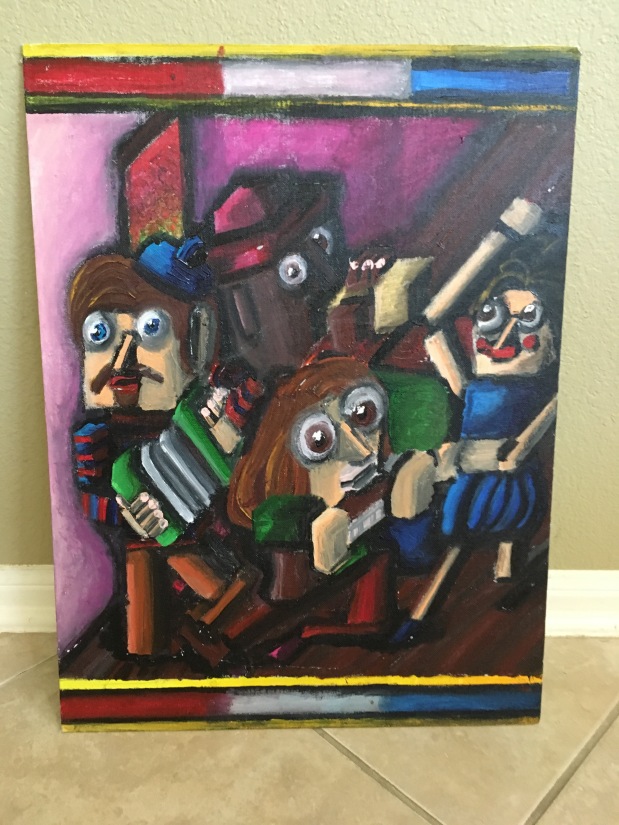 Fun little fact: the girl in the paining is moi. Yes, moi. Back in 2014, Ramstedt was looking for something to paint and I told him to paint a jazz party. That was one of the last conversations we had for almost two and a half years (aka my “disappearing act”, a story for another day), so I didn’t get to see the painting until we reconnected in March. A few weeks later, I bought the painting. Don’t go criticizing or judging on vanity. You’d do the same. 😉

Want to see his art in person? You can check it out at the Kasbah Moroccan Lounge in West Campus.

Want to buy one of his pieces? Check out his website, http://ramstedt-art.com/. Please note he also does custom paintings.

Curtis Ramstedt. Once he’s in your life, no matter how hard you try to disappear, you can’t seem to get rid of him. He adds color to life with a stroke of a paintbrush…and a corny joke or two :).